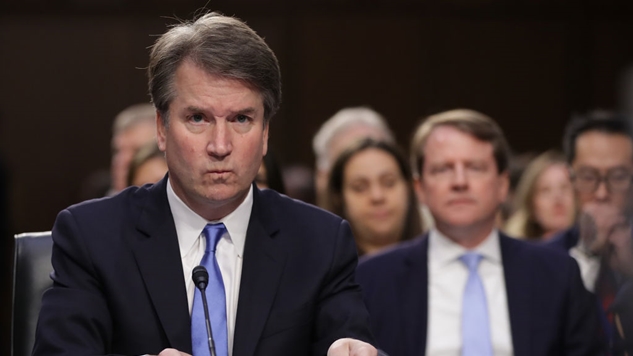 I am sure you have heard either through the TV or on social media the controversy regarding nominating Brett Kavanaugh as Supreme Court justice. The media fervor over the allegations that he may or may not have groped a girl at a high school party seem to fill the total of the reasons not to approve of him as a Supreme Court judge.

Not one in any media article or program has a question been raised about the voting record of this judge since this media inspired “controversy” has broken out. Almost like this is not supposed to be an actual qualifying reason to decide whether to nominate him or not.

Supreme court judges are supposed to be nominated based on their past rulings and their adherence to the constitution, or lack thereof. So why has the media and almost all politicians gone out of their way to distract us from that?

The main reason that i can figure is that Kavanaugh will not really rock the boat one way or another. He is in favor of violating the 4th amendment, which means programs like spying on American citizens will be perfectly alright by him. Exactly what the establishment wants. After all if our government cannot spy on its citizens, how is it supposed to keep control over you?

The notion the Kavanaugh would vote to overturn Roe vs Wade is also overblown, in a case where he could have stopped an abortion, he instead ruled in favor of the woman’s right to an abortion however the media will only tell you he probably would have blocked her abortion. This is a half-hearted lie at best.

Previously Republican Senator Rand Paul had expressed concerns about nominating Kavanaugh to the empty seat. However he has since reversed his objection and now supports his appointment. While the reasons for this switch in stance are unknown, it is a good bet that some form of deal was made to secure Paul’s vote. If Paul had intended to go along with the vote in the first place, he would not have stated public opposition.

Aside from that, there is really nothing of note that stands out in the decisions that Kavanaugh has made. He pretty much seems like if he is confirmed, he will just be keeping the status quo of allowing government to expand with no real limit. This is what the people who control our country want. To keep you distracted from the idea that we are allowing another person who will expand government control over its citizens to become a Supreme Court justice.

The major issue is how congress and the media have made this nomination into a question about a 35 year old attempted rape case, centered around the actions of a person when they were 17. First off, when did we hold juvenile crimes against a person for life and why are we treating a person as if he is guilty before being proven innocent?

What this is doing is conditioning people to not bother waiting for a trial and trusting the media to provide us with all the information that we need. In essence we are allowing the media to do the thinking for us while we respond like emotional children. I have detailed the way the media manipulates our emotions in this article.

Also worthy of note is that if you check various GoFundMe drives right now , hundreds of thousands of dollars have been raised for the accuser Dr. Christine Ford. That is quite  a payout for someone who is making claims that are 36 years old. This is just a start of that money as there will be quite a few more days to raise more cash. Possibly why the date for her testimony keeps getting pushed back. But major media outlets will not mention something like this to you.

The facts are that when you look at the timing and accusations, you realize that this is nothing more than a stunt to keep people ignorant of Kavanaugh’s judicial history and a bit of theatrics to keep people thinking Democrats and Republicans do not serve basically the same agenda. The Republicans could have put this issue to vote, but they allow it to be dragged out in an act of political theater. A theater meant to distract you from the truth.